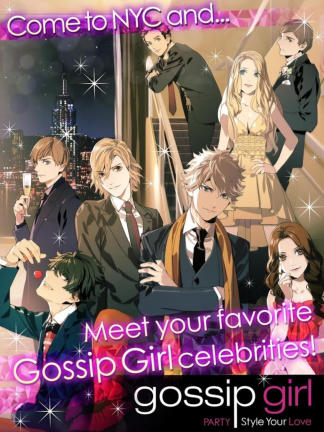 Create your own character and customize it with cool fashion and beauty items! Polish your fashion sense with the addictive Style Challenge to get luxurious prizes!

Make the right choices to improve your style score and raise your social status as you start scandalous love affairs with the hottest guys in school.

Gossip Girl: PARTY Style Your Love was a free otome game released by Voltage Inc. It was announced during summer and released on September 8 2015.

The art style might look familiar because Kurahana Chinatsu, who also worked on Uta no☆Prince-sama♪, Lamento and Fire Emblem: Three Houses (among others), was in charge of the characters design.

The story follows a girl (without a canon name) who moves to New York and there meets the characters from the Gossip Girl TV show plus some new. Both the main character and the romanceable boys (and other minor characters related to them) are original characters made for the game.

The stories also follow the Gossip Girl TV show's storyline, this is when the parts of each main story takes place:

On September 16 2016, shortly after the 1st anniversary, it was announced the cease of updates, meaning that the game wouldn't get any new content, but still would be available to play.

However on September 30, barely a couple of weeks later, it was announced that the app would close on November 30 2016, and that meant that they would shut down the app servers and remove it from the app store, and the users wouldn't be able to access the game after that.

Originally the game was released in Japan as ゴシップガール～セレブな彼の誘惑～ (Gossip Girl ~Celebrity Temptation~) on October, 2013. The main differences between both apps were the UI and the stamps feature that the GGParty didn't have. While Celebrity Temptation lacked story treats, energy items and the auto feature. 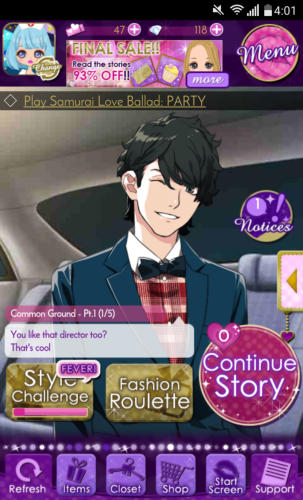 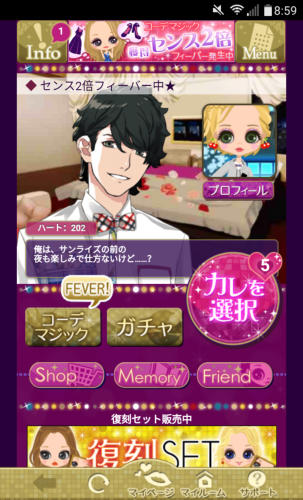 There were also some differences in the story, like some characters' names. For example Alex's family name was Lambert in the original and it was changed to Hansen for the international release. The same happened with Izaac, who originally was Schnauzer and was changed to Martin. The rest of name changes were made to minor characters.

The main character's background is also different in both games. In the original she is japanese, meanwhile in the international version it's implied that she is american, and she moves from Los Angeles to New York.

The amount of stories released also vary. Celebrity Temptation was active for more years so it got many things we never saw in GGParty. Most event stories were never released in english, the same happened with a few parts of the main stories.

It seems the original plan was to release 6 parts for each character's main story (the original 3 at least: Alex, Izaac and Marc), just like the amount of seasons the TV show had. But the app closed before that happened, on April 24, 2017.

A paid version called ゴシップガール～セレブな彼の誘惑～Novel Type (Gossip Girl ~Celebrity Temptation~ Novel Type) was released on April, 2015. This app had no social aspect, fashion mini game, or ticket system. You bought the stories with your money and you could read them as many times as you wanted with no interruptions. However this version never was released in english.

With other Voltage games there were both free and paid apps available as well, but even though it was the same characters and premise, the stories were different. I don't know if this is the case for Celebrity Temptation too or not, but I guess the possibility exists.

As far as I know, Voltage never specified the reason the games closed. Fans speculate that they didn't make enough money with them. Some said it probably had something to do with the rights.